I will always remember my introduction to Jean~Francois Bizalion. Shelly and I went to visit his cafe in Great Barrington because we had heard about the exquisite olive oils he was importing and reselling in bulk.

He was manning the sandwich counter. Three large menu boards hung above him. I was drawn to the pronouncement at the bottom of each: No substitutions. Haven had just survived it’s first summer and we were still working out the kinks. We too had a statement at the bottom of our menus that kindly requested that no substitutions be made. This request is made in consideration of taste, efficiency and consistency. We put great effort into developing a dish to make sure that it has the best profile of taste and texture, that it can be reproduced consistently on a daily basis and that it can be done with ease in a fast paced, busy environment. Substitutions throw a wrench into a well thought out formula. Will it still taste great with the amendments? Will it slow down production? Our conviction was tested time and time again during that first summer. It seemed as though everyone wanted to create their own breakfast…picking and choosing from the ingredients presented on the menu as if it were a palette of color from which they could create their own work of art. We held to our ideals and were oft met with customer frustration. Sometimes we caved to the pressure, which almost always led to disaster. Somehow the order would get messed up and the customer wouldn’t get what they wanted. So I was curious as to how his customers responded to his demand. I asked. I received the answer for which a part of me deep inside, pined for permission to speak: ” Zhere is zee door! Zee Big Y and zee deli are across zee parking lot! Zhey will make your sandwich for you!” WooHoo! Tell it like it is brother! We knew then that this was the man from which we wanted to purchase olive oil. That his standards of quality were on par with ours. We currently vend three of his superior oils, one each from Catalunya, Tuscany and Provence. Year after year Jean~Francois and his wife Helen analyze the best the Mediterranean sea~bordering region has to offer, and in many cases, help with the harvest and the pressing. We are continually impressed with how they remain committed to their goal: extraordinary olive oils for everyday consumption. It is how we feel about our food. We left his cafe that day emboldened by his fierce protection of his menu. Five summers later, our menus still state the kind request. Now our customers appreciate it because they know that it stands for quality. Truth be told, we will bend to menu substitutions when the time is ripe, and when it isn’t, we always have Jean~Francois ringing in our ears and hearts, “Zee Door! Zee Door!”, to keep us on track.
Bizalion’s Extra~Virgin Olive Oils are being offered at a 10% discount today as part of our Twelve Days of Christmas Sale. 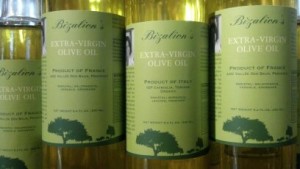